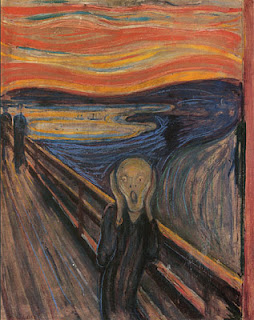 I recently had a conversation with someone about the link between depression and creativity.

In the midst of discussing the 'unknown realm' that is Recovery, we talked also about the all too familiar fear of the other side of the fence - shielded for so long behind the veil of dense fog that is depression and mental illness what will become of us, and especially our ability to create, if we dare to try and participate in our own well being through care and consideration for ourselves?
It can, and does, often seeming an even more daunting ground upon which to tread and the phrase "better the Devil you know" was probably coined for fear of such icebergs...

The idea that 'Happiness Writes White' has long been a myth perpetuated by a false notion that in order to draw forth one's greatest creative achievement we must somehow fester in a pool of sadness, grief, self-loathing, darkness and despair - the breeding ground of depression and mental ill-health being a perfect pond in which to fish for such inspiration.

It is a lie. And a dangerous one at that.

It is true that, over the years, I have had some wonderful ideas for songs and writings whilst in the depths of my own, at times seemingly never ending, 'despair'. But what is also true is that I was rarely able to bring any of them to fruition or coax from them any semblance of shape or form whilst I continued to be overwhelmed by the Black Dog (or whatever it is that you want to call it).
Alas, I have no memories of myself leaping around like Mozart, creating my masterpiece in the throws of my sorrow - whilst my mind was in the grip of such distorted ideas about myself and the world the act of getting out of bed and washing myself usually took precedence on any given day and not always successfully.

There is, sadly, a perverse romanticism to mental illness, particularly from the outside or amongst those who have never had personal or close-hand experience of it and this romanticism spreads like wild fire throughout the artistic community. The tortured artist radiates passion and proliferation, barely can he get his pen to the paper before a well of ideas flows forth with gusto. An idea is no idea at all unless it has been wrenched from your side - look how he lies in a heap, spent from his outpourings, his body barely able to go on after all he has given...

The reality of incapacitation at this level of depression is paralysis to the point of inertia - nothing is flowing forth, (least of all your life's work) except a deeply entrenched, irrational fear coupled with self-doubt, paranoia and misery.

It makes me almost angry, not to mention extremely sad, to know that this myth is passed down and around the generations, giving creedence to the idea that there are colonies of troubled 'geniuses' the world over pumping out their greatest works because of the malaise infecting their life.
If we are able to give birth to any shred of a promising idea during these deeply unhappy and troubled periods then it is in spite of our affliction and not because of it.

Isn't it a profound mistake to think that if we were to be truly successful and throw aside our confinement - and, make no mistake, depression is a prison as real as any which will confine us as long as we allow it and continue to feed it - that it would somehow result in our 'muse' being struck dumb? Isn't this simply another cruel side effect of the mental debilitation we are already in the grip of?

Being paralysed by thoughts in our own minds that convince us that we are unworthy, unwanted, untalented and uncared for is exactly how we subliminally allow depression to control us in the first place - it is unlikely that depression would simply relinquish it's hold over us without first resorting to trying every trick in the book before it would ever resign itself to the fact that we have wriggled free.
"Why would you head for the portal on the horizon?" says Clever Black Dog, "when to do so would leave your trunk of ideas behind...?"

Keep perpetuating, if you must, the distorted reality that our creative well will run dry if we dare to drag it, through our own love, care and respect for ourselves, in to the light.

But creativity is nothing without a life to go with it.
Posted by Willis at 16:05