Today I Went To Tottenham... 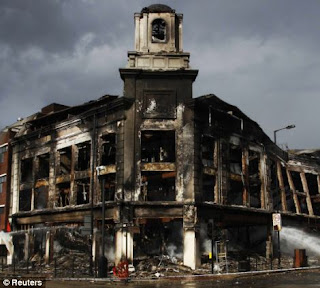 Further upset this morning by a news report where a teenage boy from Salford comments on the previous night's rioting, ("Why would I stop?! How many people are really being arrested anyway? I'm just gonna keep on doing it while I can keep getting stuff that costs loads of money!"), I don broom and gloves and go in search of a clean up operation posted online for nearby Mare Street in Hackney.
Sick of feeling a prisoner behind closed doors within the horror that has become London After Dark and hoping to contribute some way towards neutralising the bitter taste in my mouth surrounding recent events, I arrive at the rendevous only to find it already cleaned up the previous day. Ah ha...

I continue on to central Tottenham to see if I can get involved there. The chaos of the last few nights has long since quietened down, though the creepy silence is as palpable as the broken glass that covers every pavement. The air is thick with a burning smell and I expect to come across a smouldering building but instead there are just unexplained scorch marks in the middle of the road where once homemade burning blockades must have stood.
I walk past an older man talking to his friend, he looks incredulous - "They even smashed up the barbers. The barbers! Why would you do that?!" I walked past the tiny store thinking even I couldn't remember the last time an independent barber was responsible for the Global Economic Crisis.

Eventually, after many road closures and diversions, I come across the skeleton of a burnt-out old building being bulldozed to the ground.
Various TV crews grab passers by for their thoughts and comments, the backdrop of devastation being too good an opportunity to pass up. One guy, clearly in his element, waxed lyrical for a good 10 minutes before I left him to his monologue, his speech seemingly knowing no bounds and the captive interviewer making no attempt to interrupt him. According to his wisdom, the Tottenham riots have been "a gathering of The Dispossessed", a direct response to the urban decay and neglect in the area. "Violence is being met with violence" he said, "and that doesn't work". Fair point I thought about violence versus violence not generally working, but when people are frightened to go outside of their homes you begin to run out of options.
"When you put a tiger in a cage this is what happens!" he went on, losing me now, before finally acknowledging "some people, I accept, are taking advantage of the situation".
No sir, MOST of those involved in these riots are taking advantage of the situation. This is not an uprising of 'The Dispossessed'. This is not even in support of the grieving family of Mark Duggan who was shot last week and who are now in mourning for their husband, father and son, now no longer alive.
This is about men and women, boys and girls, walking round in stolen pairs of £100 trainers because of greed and insecurity - what we own and who we emulate has long been more important than who we actually are or what we do or say.
There is a difference.

Realising it's impossible to contemplate the loss of that building in a dignified silence and being unable to get anywhere near other buildings to contribute to any kind of clear-up, I tuck my broom under my arm and ask some policeman where the cordons end so I can continue the road home. A group of middle aged men and bored teenagers, hoods up and ready, simply hang around staring at the police,  enjoying the opportunity to lean on railings until maybe, just maybe, they get another chance to throw a brick or anything else when the sun goes down. God knows there's nothing else to steal...

The air throughout the area hangs with such a sense of pointlessness that it made me want to cry - only a beautiful granny asking me if I've come to help her out at home with my broom makes me feel better.

Stepping off the train back home, I overhear a man heading down to the exit, laughing heartily in to his mobile phone.
"You shoulda seen the state of my trainers, mate!", then he repeats, a tad more quietly as presumably even he realised bravado at that level was a bad idea, "Yeah, yeah you shoulda seen them! All of Waltham Cross was rinsed, all the windows, shops, everything! My trainers were in a right state!'.
I looked down at his feet - the shoes he spoke of having long been discarded, and in their place a brand new gleaming white pair...
Posted by Willis at 09:12