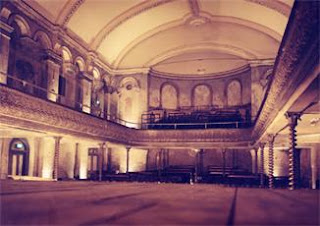 Wilton's Music Hall in the East End has just had it's funding application turned down by the Heritage Lottery fund.
This means that unless there is a last minute financial reprieve in the immediate future (or unless Paul Daniels swoops in with his wand) this incredible last bastion of Victorian music hall architecture which now doubles as an utterly unique mixed arts venue, will close by the end of the year. And all because it needs £4 million pounds to repair a structure which was woefully neglected and abused for much of the last century but is, remarkably, still clinging on for dear life.

I once went to a magical night of music there where I heard the most beautiful rendition of 'Stardust' by Hoagy Carmichael played by my friend Sheikh Ahmed. The setting, atmosphere, sense of history coupled with this stunning piece of music was so moving I almost cried...

I wondered what the bulk of £4 million quid was buying these days;
Apparently £2.5m would put Cheryl Cole back on the X Factor
The latest budget for the Olympics has risen to £9.3bn
There is a Royal Travel Fund at the Department for Transport which paid out almost £4m for Prince Andrew alone
Top players in the UK Premier League are are now reported to be earning in excess of £10m a year
Even the Prime Minister spent £680,000 of taxpayers money refurbishing Downing Street