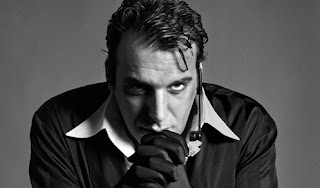 In all the time I've been making music I've only really been truly, specifically, artistically jealous of another musician twice before.

The first time happened several years ago while I was reading an interview with Bruce Springsteen. At the end of the piece the journalist asked him what music he'd been listening to and enjoying recently and one of those he sited was Fourtet. I swear to God, I was so green-eyed I could have hidden out behind Keiran Hebden's wheelie bin and jumped out on him with a can of mace...
The second time occurred last year - I was undergoing my Sunday morning ritual of listening to The Archers omnibus on Radio 4, closely followed by Desert Island Discs (yes, that is really what I do on Sundays), when the lovely Jon Snow, for it was he, played a track by Mara Carlyle and said how much her music and her live performance meant to him.
Talk about gutted. (The fact that I happen to agree with Jon Snow is neither here nor there...)

So, imagine my horror this evening when I went to see Chilly Gonzales in London and the old familiar feelings reared their ugly head. Equally at home performing inspired classical solos on the piano or spitting out genuinely hilarious and brilliant lyrics (who would think to rhyme "ball sack" with "tall chap"..?) whilst accompanying himself on the bongos - there is nothing that man can't do. And as for his band of double drummers and pianists, including the uber-talented Mocky, it doesn't even bear thinking about.
People are quick to bandy about the term genius - and in all honesty Gonzales would be the first to do so in relation to himself - but the cap rarely fits.

I would have given my right arm to be part of that band tonight.
The guy is blessed...